The Nautical Mile Marina doubles as an art gallery

Photo by Ted O’Neil
This painting by Edsel & Eleanor Ford was part of “Veteran Gallery Days” at the Anchor Building.

The marinas along Jefferson are full of boats in storage during the winter, but generally remain empty in the summer.
When Virginia Carstarphen and her husband, Todd Hayes, opened Trader Todd’s Marina in 2019, she had other ideas. As an artist, she imagined it as a gallery.
“I’ve always dreamed of opening a gallery,” she says. “It took a bit of planning, but we made it work.”
Thus was born the Anchor Building Gallery and Events, 24030 Jefferson. At 4,500 square feet, the Anchor Building is more than just a storage facility, with a circular bar in the center, restrooms, and a portable stage. The previous owner used it to store a collection of vintage cars.
“We started off pretty small, just doing pop-up retail events,” Carstarphen said.
She and Hayes met in Chicago while she was pursuing an MFA at the School of the Art Institute of Chicago. The couple owns a bar and restaurant there, also called Trader Todd’s, near Wrigley Field. When the opportunity arose to purchase the marina, they jumped at the chance.
“Todd grew up in St. Clair Shores and always wanted to get back in the water,” Carstarphen said. “After 20 years in Chicago, we felt things were stable enough to do this. We have an excellent manager and staff who run the place for us.
Besides the marina, the couple also own the dining space on the property, which they rent out at Zef’s Dockside Bar and Grill.
The first art exhibit at the Anchor Building was on Memorial Day weekend last year. Titled “Veteran Gallery Days,” it was coordinated by Project Brotherhood Resolve, a local nonprofit focused on veteran homelessness and suicide prevention. This year, the show was extended to two weeks and featured various works – from paintings to photography to wood and metalwork – produced by veterans from Southeast Michigan.
“It’s a great kick off for the summer, especially with the Memorial Day Parade on Jefferson every other year,” Carstarphen said.
Joe Gemayel, founder of Project Brotherhood Resolve, said the group’s long-term goal is to provide stable housing for veterans. 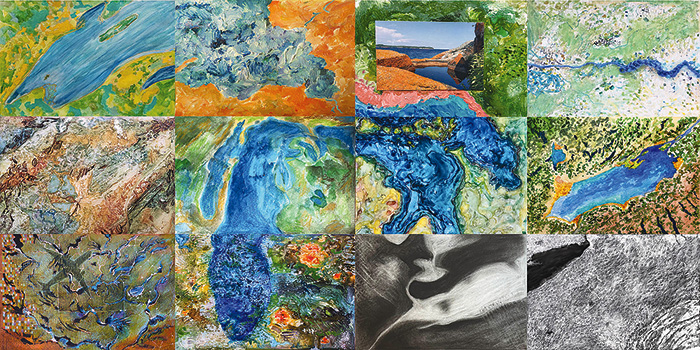 Courtesy picture
The large mosaic was created by the 12 artists participating in the “Water Worlds” exhibition, which opened on June 10 at the Anchor Building.

“Our saying is: ‘A new battle begins at home; together we will fight,” Gemayel said. “Involving vets in creating art is a way for them to cope with their PTSD.”
Information about the group can be found at projectbrotherhoodresolve.org.
Carstarphen’s next project kicked off on Friday, June 10. “Water Worlds: An Exhibit Exploring the Essence of Water” will run through Thursday, June 30. Hours are 12:00 p.m. to 5:00 p.m. Tuesday through Friday and 10:00 a.m. to 1:00 p.m. Saturday.
The exhibition will feature a variety of mediums, including drawings, paintings and mixed media, from her and 11 other artists inspired by their memories and experiences with water.
A feature of the show will be a mosaic measuring over 2 feet high and 4 feet wide that each artist has contributed to depict the Great Lakes. Packs of a dozen 5-by-7-inch note cards featuring the mosaic can be purchased for $20. A portion of the funds raised during the show will be donated to the Alliance for the Great Lakes.
The Anchor Building, which has hosted a wedding reception so far this year and is available for private events, will host a nautical flea market in July.
“There will be a few boats up for auction, but mostly it will be life jackets, dock boxes, nautical decor,” Carstarphen said.
September will feature an exhibition by Josh Moulton, a Grosse Pointe native and University Liggett School alumnus who has had his own gallery in Chicago since 2011.

The Rodak exhibition at the Abraham Art Gallery ends next week