When the coronavirus forced some of France’s busiest museums to close in 2020, it was a rare opportunity for reflection.

Conversations among curators during the lockdowns have centered around the question, “What world do we want to live in after the pandemic?” said Julie Narbey, director of the Center Pompidou in Paris, which houses the world’s largest collection of modern art. from Europe.

Narbey said his team had concluded over video calls that the pandemic was the “time to shift gears on the environment.”

“It’s in our DNA to address the big questions of the modern world,” she told the Thomson Reuters Foundation.

This has prompted a rethink of how to reduce the carbon footprint of exhibitions – from recycling staging and extending the duration of major shows to reducing the loaning of artworks abroad.

Such measures appear to be a win-win solution for museums, as they not only reduce emissions, but can also reduce costs.

It’s crucial for a part of the economy hit hard by coronavirus restrictions, according to the International Council of Museums. It can also help museums avoid mounting criticism for accepting exhibit sponsorship from fossil fuel companies.

The art world lags behind other industries in reducing greenhouse gas emissions, said Sarah Sutton, head of Environment and Culture Partners, a US nonprofit that advises cultural organizations on sustainability.

“Thankfully the industry is finally acknowledging that it’s late for the party, which means we’re finally seeing great interest in these changes,” she said.

Several initiatives have been launched in recent years – in Europe and the United States – ranging from carbon calculators to consultations and audits of galleries’ efforts to become greener.

In Paris, the Center Pompidou also sources local artwork rather than taking out loans from the United States or Asia. Picture: handout

“For me, the question is not how long it will take, but how fast can we accelerate it,” Sutton said.

While calling herself “extremely optimistic,” she stressed that more needs to be done to educate funders and donors about the work of art museums so that they become more sustainable.

Museums’ climate impacts have long been assumed to be too small to justify change, or artistic directors are equating climate with politics and fear it will hurt funding, she said.

Home is where the art is

Paris is home to three of the most visited art museums in the world: the Louvre, the Musée d’Orsay and the Center Pompidou.

In a normal year, they welcome millions of visitors, mostly from overseas, resulting in a substantial carbon footprint.

While museums can’t do much to cut tourist air travel, they can cut the flights of a Warhol or a Picasso, said Guergana Guintcheva, a marketing professor at EDHEC Lille who conducted research on museums.

According to the Galleries Climate Coalition (GCC), a global charity providing sustainable guidelines for the art sector, one of the main sources of carbon emissions from exhibitions comes from the transport of works of art from collections from around the world.

“For every work of art, there is a round trip by air – and at least two round trips for a curator,” Guintcheva said.

She cited the Palais des Beaux Arts in Lille as taking a climate-conscious approach with its recent Goya exhibition.

By favoring works from its permanent collection and pieces located in neighboring European countries, the museum reduced freight transport for the art it displayed.

The Center Pompidou also focuses on sourcing local artwork rather than loans from the United States or Asia.

Some museums are also greening exhibitions by pooling resources. 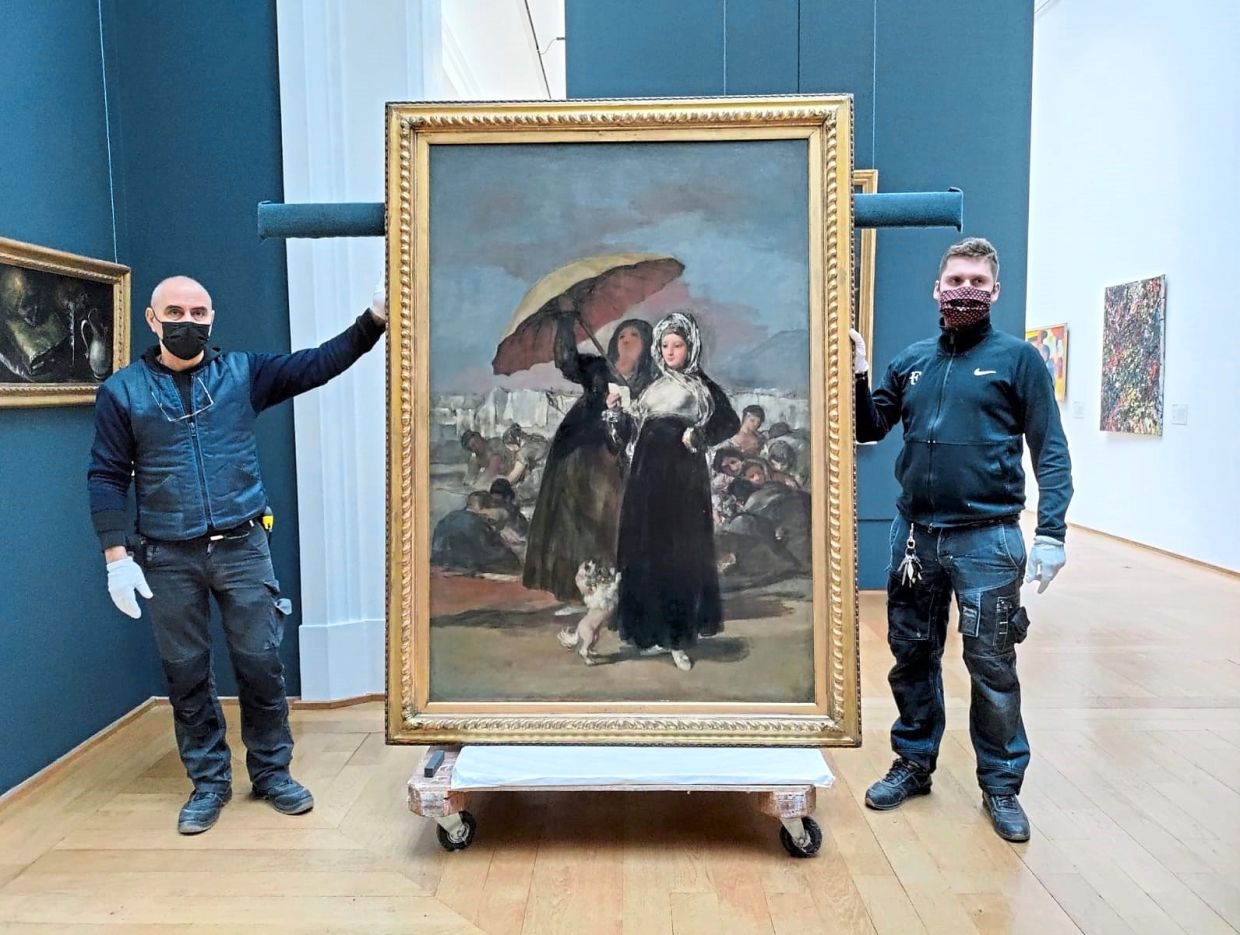 By favoring works from its permanent collection and pieces located in neighboring European countries, the Palais des Beaux Arts de Lille in France reduced freight transport for the art it exhibited. Picture: handout

Center Pompidou’s Narbey said shipping requests can be shared with the Louvre or Musée d’Orsay for transport from the same locations, such as New York, reducing both emissions and costs.

The GCC launched its “Sustainable Shipping Campaign” last month calling for a global reduction in air freight by 2028 and local low- or zero-emission deliveries by 2025.

Curators are used to creating blockbusters of 150-200 works, but sustainability advocates say these could be scaled back.

Staging a show requires a large amount of carbon-intensive materials, which are often thrown away at the end of the run. More and more museums are now looking to recycle wherever possible.

At the Center Pompidou, parts of the staging from the 2020 exhibition Christo Et Jeanne-Claude were reused in last year’s Hito Steyerl exhibition at the artist’s request.

“She looked up to Christo and she was interested in following in their footsteps, but she also wanted, like us, to have a smaller carbon footprint,” Narbey said.

In Lille, the Palais des Beaux-Arts presents a new exhibition, magic forest, which recycles 70% of the scenography and staging of the Goya exhibition.

One of the ways the museum achieved this was to reuse a “rotunda” room in the lobby that was designed to be multipurpose.

Slowing down is also part of the green philosophy of some French museums. Extending the duration of large exhibitions instead of having a high trade show turnover rate can reduce carbon emissions.

It can also prove popular with Center Pompidou visitors who sometimes complain when shows last only three months, Narbey said.

Sutton from Environment and Culture Partners said tackling climate change was still not a key selling point for many members of the public.

“I see it as a matter of credibility more than attracting visitors, and credibility matters to funders, policy makers and community members,” said Sutton, who previously held various positions in museums. and taught at universities on the subject.

“Museums and galleries are organizations of public utility. It forces them to do no harm,” she added.

“‘Do no harm’ is a definitive, not a comparable.” – Thomson Reuters Foundation

Check Out These Art Exhibits Opening in Austin