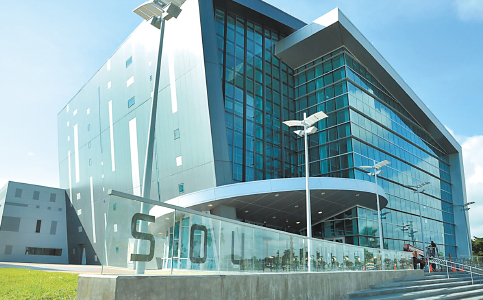 The South Miami-Dade Cultural Arts Center is to be renamed “Dennis C. Moss Cultural Arts Center” because county commissioners approved a resolution rescinding a rule that “the naming, renaming or designation of a road, of a county facility or property may not be for an elected official currently in office or who has held elected office within the last five years.

“It seems very common lately that so much is being renamed for people who are still alive, or who are still politicians, or who don’t fall within that five-year period that they must have been out of office. “, said Mary Waters, resident of Miami-Dade, during the public hearing of the resolution.

Rule 9.02 of the commission’s bylaws also provides that the commission may, by a three-fifths vote of the members present, name a county road, facility or property after a living person who “has made a direct and significant contribution to this community. ”

“I think some public servants here in Miami-Dade County deserve recognition before they pass away,” said Danielle Cohen Higgins, commissioner for District 8, where the arts center is located.

“Commissioner Dennis Moss is the perfect example of this, not only because of his 27 years of service to Miami-Dade County, nor because of his incredible efforts after Hurricane Andrew, his list of service and accomplishments for South Dade is exceptionally long and outstanding, and it has a famous saying, ‘We leave footprints in the sand’ and renaming the South Cultural Arts Center after curator Dennis Moss would be exactly that, leaving footprints in the sand,” a- she added.

“Commissioner Moss was the engineer who ensured that the South Dade community was represented when it came to cultural arts,” said Commissioner McGhee. “The reason being that it’s so important is to give individuals their flowers while they’re still there to remind them how much we appreciate them,” he added.

Mr. Moss is currently vice chairman of the Miami-Dade Expressway Authority and his term expires in May 2025, according to the authority’s website.

The longtime South Miami-Dade County resident and former District 9 commissioner stepped down in November 2020 due to term limits. In his more than 27 years of service, he worked on a comprehensive plan to rebuild areas affected by Hurricane Andrew, helped save Homestead Air Reserve Base after the federal government listed it for closure and advocated for the South Miami-Dade Cultural Arts Center, the document notes.

A review of Miami-Dade’s legislation reveals that commissioners have waived the same rule twice in the past year.

In March 2021, the commissioners also approved the renaming of “West Perrine Park” to “Wilbur Bell Park”. Mr. Bell has been a resident of Perrine for 79 years, founded numerous businesses in South Miami-Dade, and in 2020 was elected president of Miami-Dade County Community Council 143-14. This proposal was also presented by Commissioner McGhee.

As Miami Today reported last week, the naming of certain county assets has historically resulted in payments to the county. Last year, county commissioners approved a 19-year, $135 million deal to name the county’s FTX Arena, and Miami-Dade County’s Adrienne Arsht Center for the Performing Arts was named in the honor of the $30 million donor who helped fund the county’s project.